A week before Memorial Day 2015 the seemingly unimaginable happened soon after moving in to our new house; a heavy rainstorm dropped several inches of rain in less than a half hour causing the city sewer system to back up into our and several neighbors’ basements.  Having just moved three days prior to the flood the basement was still full of stacks of unpacked cardboard moving boxes containing possessions no longer to be unpacked but to be sent straight to the trash. 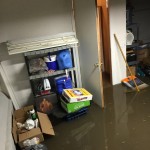 About 10,000 gallons of raw sewage backed up into the basement.

While we were home during the storm there was no indication that the sewers were in fact running in reverse. There were no telltale signs of gurgling or slow flushing toilets; the enemy was silent and stealth-like.  By the time we discovered the problem it was already too late to salvage anything, the damage had been done.

Boxes of unpacked clothes, treasured possessions, even appliances were either destroyed or in need of professional repair and cleaning.  And then there was the smell… 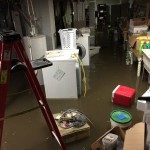 Appliances sit exactly where the moving company left them.

The smell alone was enough for me to keep away from the basement but I couldn’t help but watch the raw sewage inch ever higher until it reached its peak around 16 inches. I too had reached my peak and at 2am called it a night, dreading the disaster that awaited me in the morning.  Thankfully, the water had receded the following morning allowing the cleanup to begin. The cleanup was intense and the losses were mind-blowing.  More important to me however, was how detect, if not prevent this scenario from replaying itself again in the future. 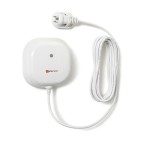 After talking with a few plumbers the general consensus was to install a sewer back flow prevention device; a valve that automatically closes anytime the sewer system flows backwards into the home. This solution is neither quick nor inexpensive but will surely happen in the near future. Since early detection was a must and likely the quickest and cheapest option, I turned to Iris for a solution. The logic is simple; if a sewer backup happens again in the future we will have immediate notification and if we are home, we can rush down into the basement to take appropriate action. 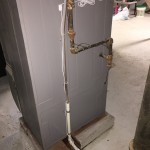 Water leak detector installed on furnace with probe 3/4″ above the floor drain.

Using Iris for sewer backup detection was simple; the day after the basement was professionally cleaned and dried I paid a visit to the local Lowe’s store and purchased the Utilitech Water Leak Detector.  Setup was both quick and simple; paring happened straight away and mounting was easy using the supplied double stick tape (screws are also provided).  Before installation I wanted to be absolutely sure that Iris would immediately notify me when water was detected, after all a delay of even a minute could make or break any reasonable chance of salvaging belongings. A full-on test was in order and it’s captured in the video below.

To monitor sewer backups we installed the unit on the furnace with the probe just above the floor drain where the sewage had entered from.  The results of the test were impressive; notifications were immediate the sensor was fast to alert.  While I hope that it never activates, it is comforting to know that Iris is on the watch. 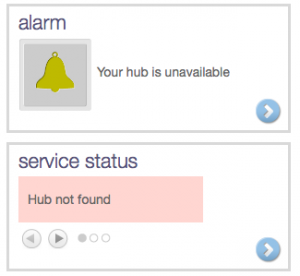 It appears that Iris may be down yet again.  When logging into the Iris website I was greeted with a “Hub not found” error and all of my devices being offline.  Our hub also shows an error indication again.  This marks the second day in a row of system instability for Lowe’s Iris.

Unlike last nights outage, this one appears to be back-end related.  Iris servers are reporting to be up and responding to http requests.

Are you having trouble too?  Leave a comment below.

Update 1:11pm: It appears that something caused our hub to go offline.  A PIN reset brought it back online.  Based on our past experience outages such as these are typically caused by a backend issue and have often accompanied system outages.  We will be closely monitoring the system throughout the day.

Iris systems currently appear to be down.  Our Iris system monitor is currently seeing fluctuations in availability on the main Iris website as well as the API server.  Various members of the LivingWithIris forum also are reporting problems with Iris.  Our own IrisUsers hub is currently showing a red trouble light indicating a system issue.

Having an issue with your Iris system?  Leave a comment below.

Update 5/19/2015 10:54PM: All services appear to be back up and stable.  According to a post from IrisByLowes at LivingWithIris forums, the Iris servers were hit by a denial of service attack this evening.  Our Iris System Monitor logs also confirm the event was most likely a denial of service attack with the main Iris website suffering a continuous outage of nearly 30 minutes. 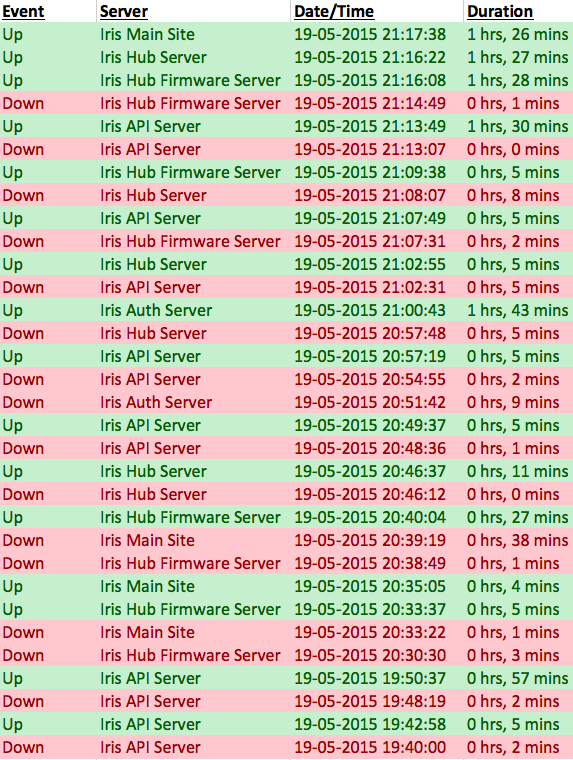 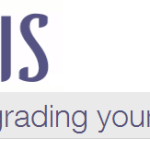 It’s been almost a week since the 4.06r05 hub update was released that brought support for some yet to be released devices along with the usual “performance enhancements and bug fixes”.   Outside of the issues I’ve recently encountered which I’ll cover shortly, I haven’t seen any firsthand reports of problems associated with the update.   Also receiving significant mentioned in the release notes was a mobile app update bumping the version to 1.9.40 for both the iOS and Android apps.  This update will bring a fix targeted towards secondary users and their PIN codes and also the ability to upgrade the hub from within the app.  So far the mobile app updates have not been released and after a week, it’s unlikely at least for iOS that Apple’s review process is the reason for the delay.

On my system, it has been a few days since the update was installed to one of my hubs and for a short time the system operated normally.  That all changed as I was reconfiguring Iris Monday when I noticed the Alarm Widget presenting me with an ominous warning about my alarm system.

There is a problem with your alarm system. 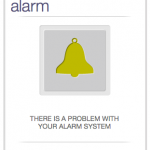 In fairness to Iris, it has been a long time since I have experienced any problems with a hub update and there are no guarantees this outage is in any way related to the update.  While it is distressing to know that my alarm system has been rendered inoperable I have confidence that Iris support will come through with a fix.

The problem has been reported to Iris support and a follow up will be posted when the system is fixed.  In the meantime, please share your own experiences with the hub update by leaving a comment below.