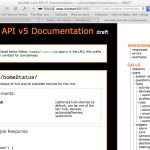 Iris API documentation on one of the Iris servers.

When Iris first launched back in 2012, one of the initial statements from Lowes that it was their goal to open the platform for 3rd party developers.  After 18 months, like some Iris accessories, it’s safe to stay this promise has yet to be delivered too.  I could devote an entire article full of supposition and speculation as to the reasons why Lowes has not opened the platform to developers, but I believe that for now, the motivating reason is to maintain control of the platform.

The approach Lowes is taking with Iris is not entirely different than what Apple is doing with their ecosystem of hardware and software.  This control of hardware and software and how they fit together should arguably result in cutting edge features, functionality and ultimately, a better user experience.  Whether you like Apple or not, Apple understands the need for a positive user experience and has learned to effectively execute in that area.  The Iris ecosystem, much like Apple’s, attempts to re-create that in the home automation space, but with one key difference; Apple never claims theirs to be open.

Iris’ open platform offers consumers wide range of connected home devices for peace of mind wherever they are and whenever they want it – lowes.com

Iris was developed by AlertMe.com.

It is no secret that Lowes did not invent the Iris platform, rather they used existing technologies such as Zigbee and Z-Wave, and partnered with Alertme.com to build the hub and backend systems which tie everything together.  As with Apple, Lowes took existing technologies and connected them together to provide a solution aimed squarely at the average user.

Back to the original question of why hasn’t Lowes opened up the platform?  The answer, which only Lowes management can truly provide, is certainly not for a lack of capability.  AlertMe.com, the creator of the Iris backend, already provides an API to licensees of their technology.  In poking around the many Iris servers that compose the Iris live and development systems, I found several instances of API documentation published on those servers, open for all to see, if you know where to look.  So there is an API after all, complete with documentation and examples, but does it work?

The answer is a resounding “yes”.  In less than an hour I was able to log into the Iris system using a little PHP web scripting code.  In addition, I was able to arm and disarm the alarm and set the various system modes (HOME, AWAY, NIGHT, VACATION).  Clearly, the framework has  been developed and is already being used in the Iris mobile apps.  The possibilities of 3rd party development are exciting; imagine a desktop Iris app, or Iris Dashboard on your PC, or even integration to IFTTT for exciting control opportunities.

It is up to Lowes to decice when, or even if, to open up the platform for 3rd party developers.  I can only hope that Lowes will chose the path of innovation and do what is best for their customers.

Would you like to see more 3rd party innovation, such as alternative apps for Iris?  Leave your comment below.

9 thoughts on “Openness and the Real Iris API”