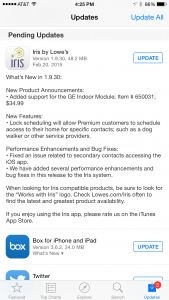 Lowe’s today released an update to the Iris iOS app which adds support for the new GE indoor modules and recently released lock scheduling feature.  Aside from the usual bug fixes and performance enhancements, the release notes state that it also fixes an issue with secondary contacts logging into the app.  This update to 1.9.30 is available in the Apple App store and weighs in at nearly 50MB.