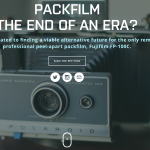 You can help save Polaroid Pack Film! savepackfilm.net

Long before there was Home Automation, before computers connected the world, and digital cameras lived in everyone’s pocket, there was the Polaroid Instant pack film camera, an innovation released to the world over 50 years ago.  It’s hard to escape the realization that world is a much different place than it was 50 years ago; it was a time when instant gratification had a uniquely different meaning.  It was a time when instant photography was not about Instagram, it was about the anticipation of waiting for the a new memory to develop, quite literally in front of your eyes.

Instant photography was as much about taking a picture as it was a social experience.  I have many fond memories as kid in growing up the 70’s and early 80’s with groups of family and friends huddling around Polaroid pictures as they developed.  These memories to this day invoke a feeling of anticipation that just cannot be satisfied by todays digital tech.  What is even more remarkable than the technology of that time is the fact that one can still buy commercially available film for those same cameras, or at least you could…

Not the Polaroid you grew up with….

Chances are back in the day you or someone you knew owned a Polaroid camera, but was kind was it?  For many the name Polaroid brings to mind the plastic, instant prints with the large white border at the bottom, a technology known as Integral film.  However, peel-apart pack film is a much different animal which brings a more realistic photographic quality that is as close to a lab developed photographic print as one can get with an instant camera.  The end result is a glossy, paper photograph that is virtually indistinguishable from a print made in a photo lab.

Even with the demise of Polaroid’s film business in the late 2000’s, FujiFilm, based in Japan continued to carry the torch by producing a wide variety of commercial pack films.  Over the years, one-by-one, Fuji has quietly pared down the line of pack films until the last one, Fujifilm FP-100C remained.   That has all changed…  Fuji has recently announced that all pack film production will cease, leaving millions of cameras destined for landfills while bringing instant photography one step closer to the history books.

Florian “Doc” Kaps, the founder of the Impossible Project which successfully saved production of Polaroid SX-70 and 600 Integral Instant Films has stepped up and is trying to work with Fuji to save production of FP-100C color pack film, the last surviving pack film to be manufactured.  Even if you don’t own one of these cameras, or have ever used one, you can help keep the memories alive.

Visit savepackfilm.net and learn more about his efforts, sign the petition, and share this on your social media feeds.  If enough people speak up, pack film can be saved.